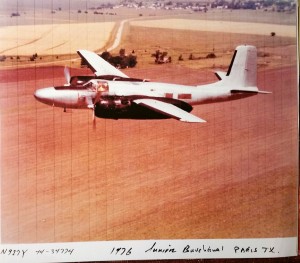 A-26B Invader, S/N: 44-34774 was built at the Douglas Aircraft Company in Long Beach, CA in late 1944 at a cost of approximately $254,000 to the US government. The airplane was test flown and then transferred directly to storage in Kingman, AZ having never seen any combat missions. At the end of WWII it was stricken from active service from the Army Air Corp and sold at auction on 9/26/1946 for approximately $2500. At the time it was sold at auction it only had 8 hours 20 minutes total flight time. Its initial test flight and ferry was to the storage depot.

Shortly after the auction sale, the airplane was purchased by Standard Oil of Indiana. It flew 6,400 hours over the next 18 years. During this time it was modified by various notable airframe modification companies: Grand Central Aircraft Co. of Glendale, CA and On Mark Engineering of Van Nuys, CA for civilian executive travel prosperous. The gun turrets, gun nose and bomb racks were removed. The bomb bay doors were locked in the closed position. Large picture windows were installed on both sides of the fuselage along with luxurious passenger seats, cabinets and amenities that brought new life to the airplane as a corporate executive transport.

The B-26 Invader, as they were re-designated after WWII was one of the fastest civilian “corporate” aircraft of its time. It was safe, fast, reliable and economical. During its time with Standard Oil it was flown from coast to coast covering the entire North American continent.

After Standard Oil moved into the jet age they sold the airplane to Green Acres Farms in Lexington, KY, which operated the airplane from 1966-1974. It was during this time that Jimmy Leeward flew the airplane after the company moved to Florida.

In 1976, the airplane was apparently operated by Junior Burchinal in Paris, TX with the Flying Tigers Air Museum. There is an in-flight photo stamped as such from 1976. Junior Burchinal operated a Warbird flying school.

From 1974-1984 this A-26 passed through a number of civilian owners, had very sparse logbook entries and undetermined and dubious history. It most likely was involved in drug running to/from Mexico at some point during it life.

The plane was sold in December 1984 at tax auction from Gillespie Field, San Diego, CA to The Collings Foundation and was ferried to Rockford, IL to Courtesy Aircraft for storage. One engine was replaced prior to the ferry flight. There was an in-flight failure of the other engine en route to Rockford and the second engine was replaced in Arizona.

The plane sat in Rockford, IL from 1985-1989. Dick Cooper purchased it in 1990 and had it prepped and ferried to Everett, WA for a planned slow process return to regular flying status. After his unexpected death in 1993, the airplane continued to sit outdoors until donated to the Air Station Air Museum in Arlington, WA. The airplane was disassembled and transported via road the short distance from Everett to Arlington, WA to be placed in indoor storage. The Air Station, its volunteers and vendors performed much of the pre-restoration work from 1995 – early 2000s.

The Air Station never really took off. The A-26 was traded to Jimmy Leeward for a Grumman Guardian in approximately 2010. Jimmy intended to restore the airplane to flight status and enter it in the Reno Air Races. Jimmy sold the airplane to David Fronk and Peter Garraty in March 2011. Arrangements were made to move the disassembled airplane to Provo, UT for further evaluation and complete restoration to its original flight status as an A-26 Attack Bomber. We have the 8 gun nose, Recon nose and a plastic Bombardier nose too.

SIDE NOTE: Jimmy Leeward raced his P-51D Mustang the highly modified “Galloping Ghost” at the Reno Air Races for the last time in September 2011. The airplane experienced an in-flight failure of the trim system and crashed into the grand stand killing Jimmy and several spectators.

It was determined that the A-26’s airframe was in excellent condition, little corrosion and no damage. The log books are completed but sparse. Total time was determined to be 6,415 hours.

Both engines were sent to Anderson Aeromotive in Grangeville, ID for evaluation and overhaul as required. Propellers were overhauled but not yet assembled. Control surfaces were recovered using the Stits method. Stabilizers and flaps were overhauled. Corrosion control procedures were completed, hardware was NDT’ed and re-plated, new abrasion boots were installed using current approved FAA methods and procedures.

On November 30, 2014 the stabilizers were installed all in accordance with the procedures outlined in the original A-26 Erection and Maintenance Manuals. The aft fuselage was cleaned and painted on the inside and polished on the outside. The tail section was assembled including polished stabilizers. Painted, balanced, control surfaces, trim tabs, control cables, pulleys, etc.

On December 11, 2014 the cabin interior (bomb bay) was cleaned and corrosion proofed. There were several corroded brackets that were removed and replaced with new surplus parts as specified by the Douglas parts catalog and reinstalled. Stars and Bars were added to the aft polished fuselage. The aft gunner upper green house windows were painted on in their original position.

2015 saw progress in the forward fuselage including including the 8 gun nose, refurbished original instrument panel, seats and furnishings that will be duplicated that were found in the original 1944 airplane.

The wings are currently being overhauled, and we will eliminate small beds of surface corrosion in several ribs, corrosion proof the interior assembly and paint the exterior a gloss silver. The fuel tanks were removed for evaluation and to determine the extent of corrosion usually found, as described by the AD note that addresses an issue in the large fuel tank aft of the engines. It was determined that there is no corrosion in this area and progress to complete the wing repairs hopefully will continue. They will be installed by the end of 2019.

The landing gear was removed for NDT, repairs and overhaul, ready to be reinstalled once the wings are installed on the fuselage. More updates to follow as progress continues.